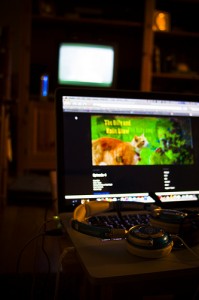 If you search Google to find out the total number of hours that the average American spends watching television, you will find that the estimates vary by the source of the data.

However, no matter what source you turn to for this estimate, it is very clear that Americans still spend a lot of time watching television.

And, unless you live under a rock, you know that more and more people are using social media.

In fact, according to a recent Nielsen study, titled “State of the Media: The Social Media Report Q3 2011,” nearly 80% of active Internet users visit social networks and blogs.

Where Do We Find the Time?

And, according to Forrester Research, the amount of time that we spend online has increased in recent years.

So, does this mean that we are spending less time doing other things?

The answer to that question in some cases is: Yes.

According to an article that was published on June 23, 2011, on online.wsj.com, titled “Leisure Trumps Learning in Time-Use Survey,” the number of hours that Americans spend working has decreased in recent years.

According to the article, “On average, Americans aged 15 or older spent about three hours and 58 minutes working on weekdays, according to the 2010 American Time Use Survey released Wednesday by the Labor Department. That was a six-minute decrease from 2009, and down 26 minutes from 2007, before the recession hit.”

The article also points out that in the same time frame, the number of hours that Americans spent watching television and sleeping has increased.

A blog post published last year on blogs.forrester.com, titled “US Consumers Now Report Spending Equal Time With TV And The Internet,” has further insights into where people are finding the time to watch television and surf the Web.

When discussing where people are finding the time, the article states that, “Well, some is being drawn from the decreased use of print media, but increasingly people are finding new ways to incorporate the Internet into their daily lives at times where, before, media wasn’t part of the picture. And of course, there’s the issue of multitasking, something younger consumers are especially becoming adept at.”

The fact that more people are consuming content from multiple media channels simultaneously is noteworthy.

What People Are Using Their PC For While Watching TV

Another post on blogs.forrester.com, titled “The Data Digest: What Are People Using Their PC For While Watching TV?,” lists some of the online activities that people participate in when they watch TV and use a PC at the same time.

The blog post points out that when both the television and the PC are on at the same time, the attention that the television gets is diminished greatly. In fact, the author of the post posits the question: “Has the TV just become background noise?”

While the top four activities that people are doing with their computers while watching television have nothing to do with what they are watching, the news isn’t all bad for the television networks.

First, at least from the article, we don’t know how much time is devoted to the computer. Therefore, people might be browsing the Web during commercials. (Okay, this might not be good news for brands and their advertising agencies, but that’s another blog post.)

And third, 44% say that they email, chat and visit social networking sites on topics that are not related to the TV show that they are watching. This is a very interesting figure.

If you have been on social networking sites for any amount of time, you know that if some event is happening that catches someone’s attention, they are going to talk about it.

So, if a television program is good, it is going to generate some chatter on social networking sites and drive people to watch the program.

But you don’t have to take my word for it.

In the video, Gary Vaynerchuk, founder of VaynerMedia and a New York Times and Wall Street Journal best-selling author, talks about how social media is helping increase television ratings by bringing the virtual water cooler to your PC, laptop, tablet or other mobile device.

I think he makes a very good argument.

People are still watching a lot of television and more and more people are using social networking sites.

Furthermore, people are spending a lot of time doing both activities, often at the same time.

Given the fact that social media can influence what people watch on television and television can fuel the conversations on social media sites, in my opinion, these two mediums are helping each other make the viewers’ television experience more enjoyable and social.

In the end, that’s a win for everyone.